Since the Korean War,  this Department has shifted Minority members of the Armed Forces to areas where combat is most likely to occur,  with the aim eliminating,  through combat, as many combat-trained Minority servicemen as possible.  Today, the ratio of Minority member combat deaths in Vietnam, where they are serving as "advisers," is twice as high as the Minority population ratio to the rest America.

Below is the timetable for KING ALFRED as tentatively suggested by the JCS who recommend that the operation be made over a period of eight hours:

1.   Local police and Minority leaders in action to head off the

2.  Countdown to eight hours begins at the moment the President

determines the Emergency to be: 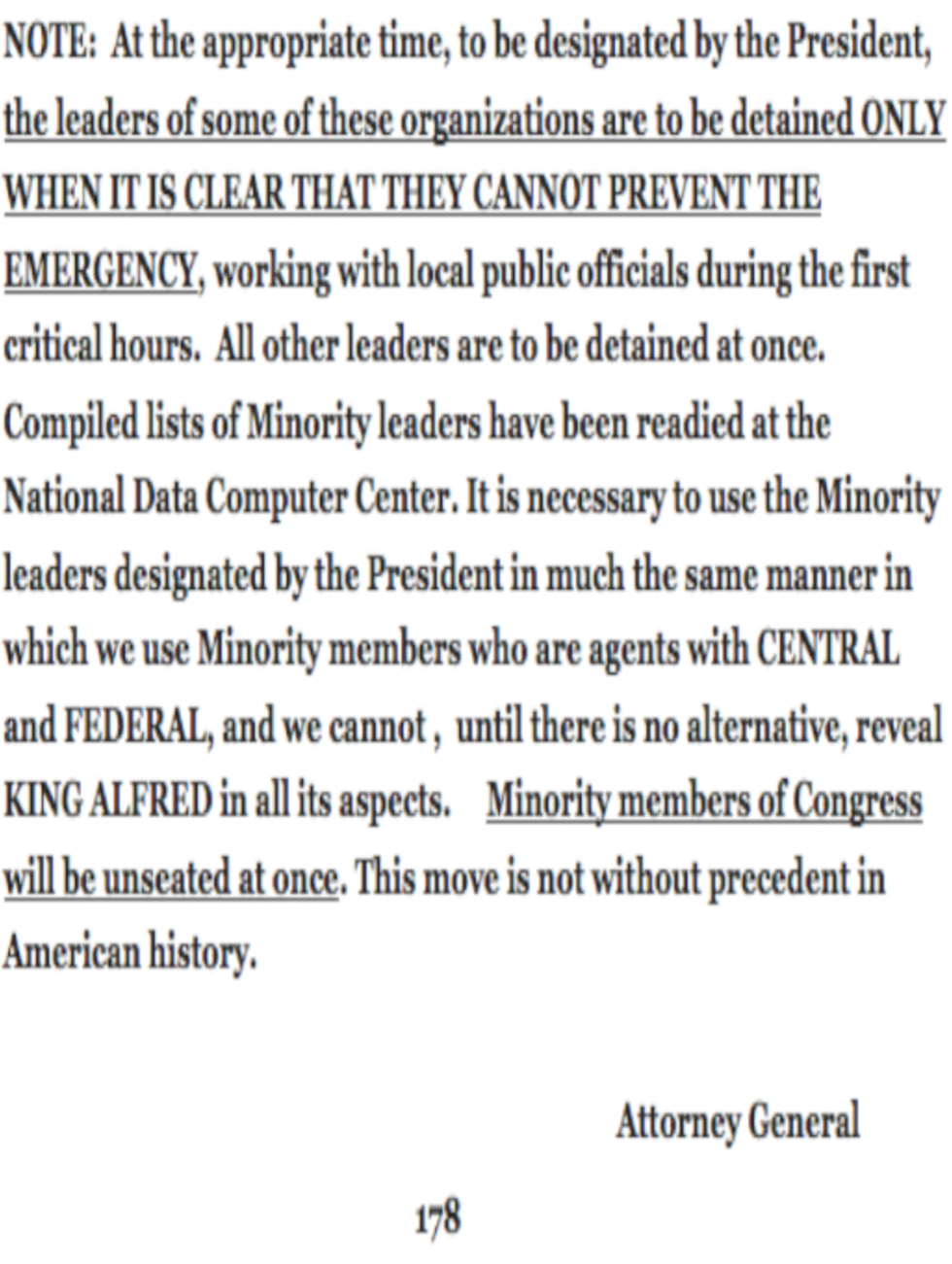 under constant, 24-hour surveilliance.  The organizations are:

NOTE:  At the appropriate time, to be designated by the President, the leaders of some of these organizations are to be detained ONLY WHEN IT IS CLEAR THAT THEY CANNOT PREVENT THE EMERGENCY, working with local public officials during the first critical hours.  All other leaders are to be detained at once.  Compiled lists of Minority leaders have been readied at the National Data Computer Center. It is necessary to use the Minority leaders designated by the President in much the same manner in which we use Minority members who are agents with CENTRAL and FEDERAL, and we cannot ,  until there is no alternative, reveal KING ALFRED in all its aspects.     Minority members of Congress will be unseated at once. This move is not without precedent in American history. 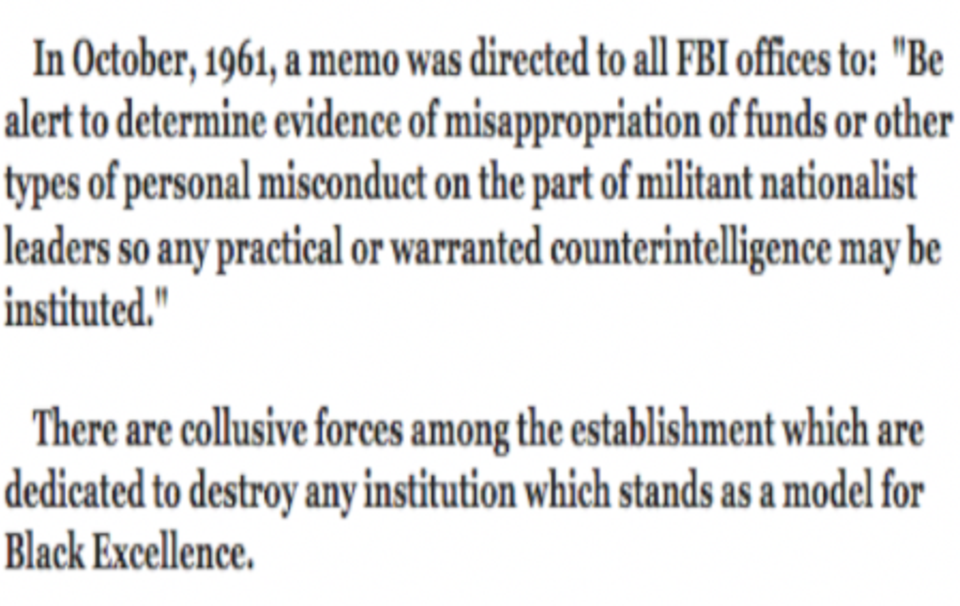 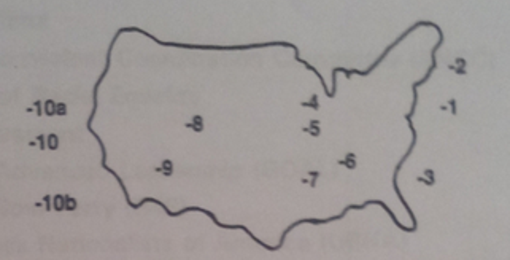 This memo is being submitted in lieu of a full report from the joint Cheifs of Staff.  That report is now in preparation.  There will be many cities where the Minority will be able to put into the street, a superior number of people with a desperate and dangerous will.  He will bhea formidable enemy, for he is bound to the Conitinent by heritage and knows that political asylum will not be available to him in other countries. The greatest concentration of the Minority is in the Deep South, the Eastern seaboard, the Great Lakes region and the West Coast.  While the National population exceeds that Minority by more than ten times, we must realistically take into account the following:

for various reasons, engage the Minority during an

breakout of war abroad  means fewer troops at home to

until help arrives, though it may mean fighting a superior

force, but there are about one million Minority members in

few hours.  The lack of weapons, facilities and logistics,

all put the Minority at a final disadvantage. 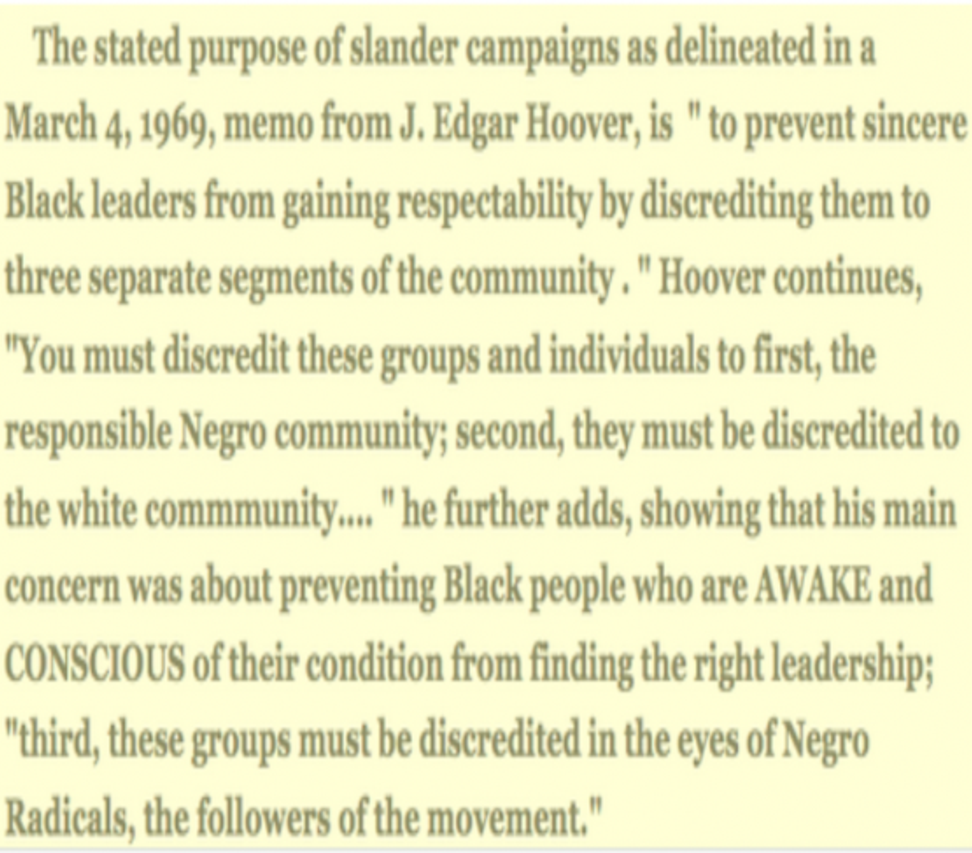 a further course of action has been decided.

NO ATTEMPT WILL BE MADE TO SEAL OFF THE CANADIAN AND MEXICAN BORDERS.

There are 12 major Minority organizations and all are familiar to the 22 million. Dossiers have been compiled on the leaders of the organizations, and can be studied in Washington. The material contained in many of the dossiers, and our threat to reveal that material, has considerably held in check the activities of some of their leaders. Leaders who do not have such usable material in their dossiers have been approached to take Government posts,  mostly as ambassadors and primarily in African countries. The promise of these positions also has materially contributed to a temporary slowdown of Minority activities. However, we do not expect this slow-downs to be of long duration, because there are always new and dissident elements joining these organizations, with the potential power to replace the old leaders. All organizations and their leaders are 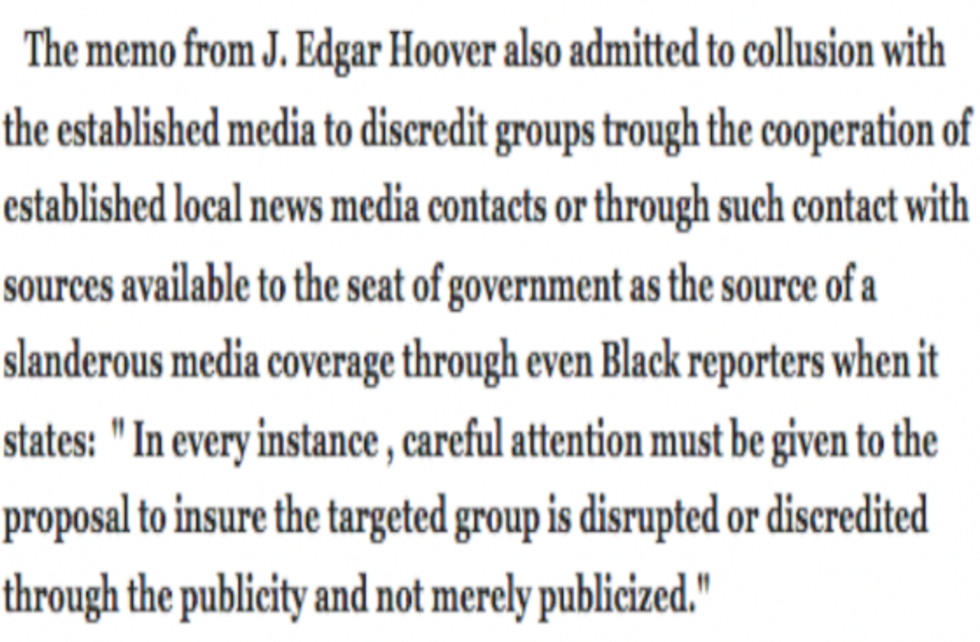 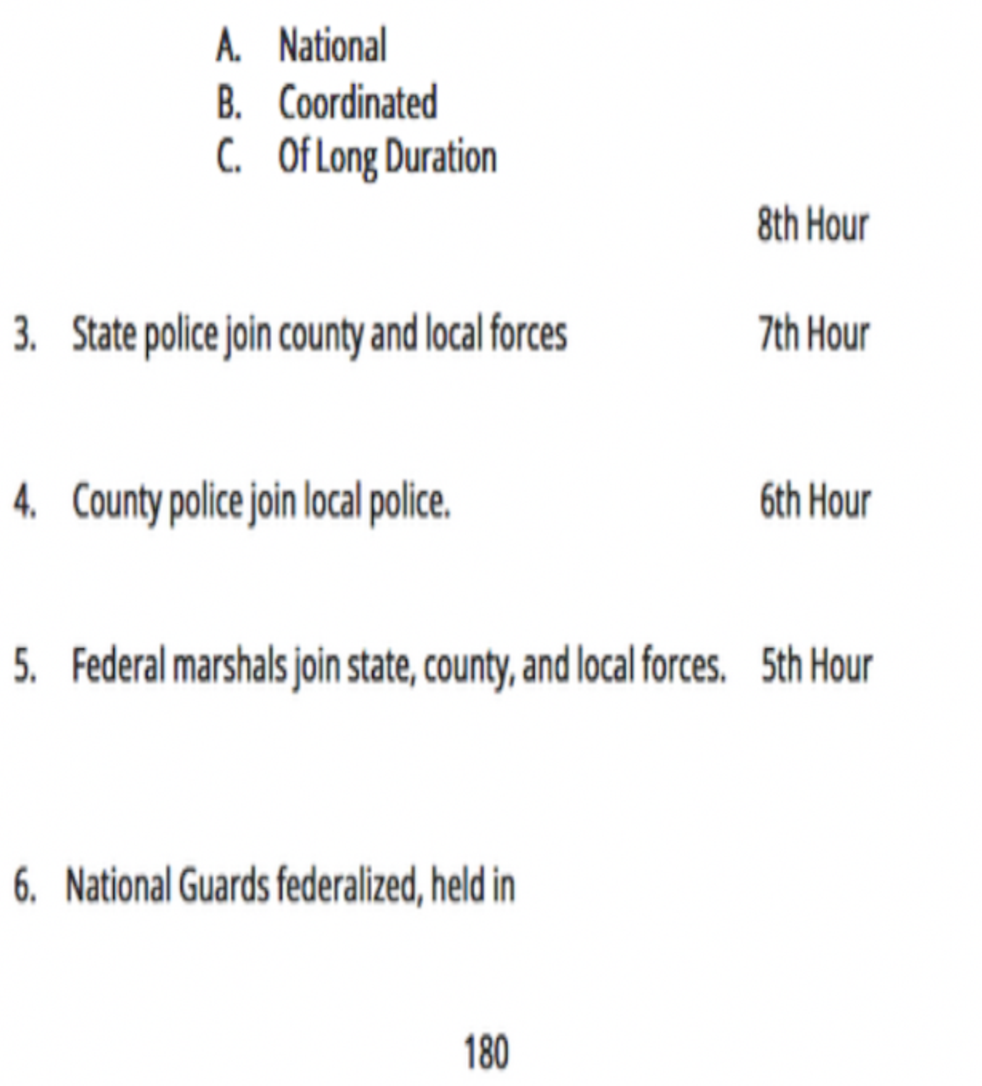 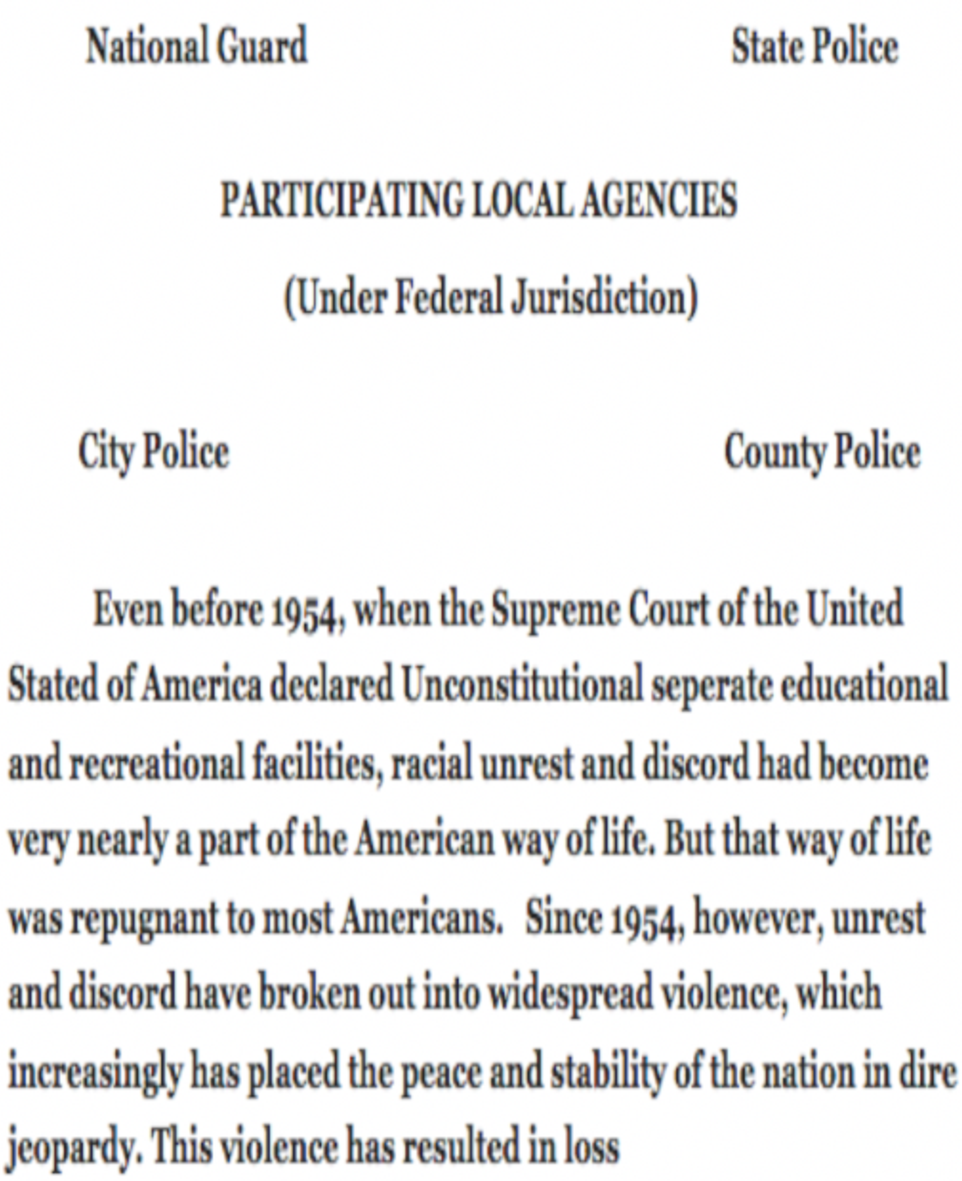 In the event of widespread,  continuing, and coodinated racial distubances in the United States, KING ALFRED, at the discretion of the President, is to be put into action immediately.

Even before 1954, when the Supreme Court of the United Stated of America declared Unconstitutional seperate educational and recreational facilities, racial unrest and discord had become very nearly a part of the American way of life. But that way of life was repugnant to most Americans.   Since 1954, however, unrest and discord have broken out into widespread violence, which increasingly has placed the peace and stability of the nation in dire jeopardy. This violence has resulted in loss

It has been documented that the government of America is opposed to the rise of Black peopleto real freedom. A group of recently revealed memos from former FBI offices acrosws the nation showed that the organization is engaged in an overt policy and program to "expose, disrupt, or otherwise neutralize, "Black leaders and organizations in this country.

The fact that Black groups have been in conflict with one another, especially close progressive groups in recent years, is no accident. As the August 25, 1967, memo delineates the tactics of divide and conquer used by an arm of the federal government, it states:" No opportunity should be missed to exploit, through counter-intelligence techniques, the organizational and personnel conflicts of the leaderships of the groups; and where possible, an effort should be made to capitalize upon existing conflicts between competing Black nationalist organizations."

The memo from J. Edgar Hoover also admitted to collusion with the established media to discredit groups trough the cooperation of established local news media contacts or through such contact with sources available to the seat of government as the source of a slanderous media coverage through even Black reporters when it states:  " In every instance , careful attention must be given to the proposal to insure the targeted group is disrupted or discredited through the publicity and not merely publicized." 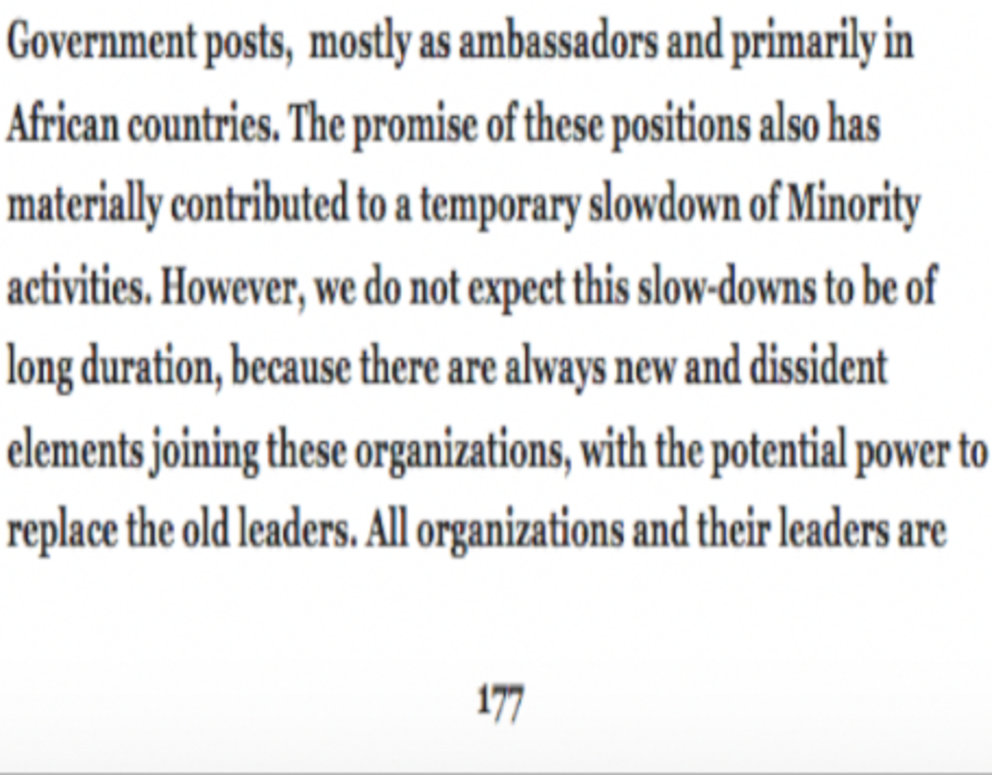 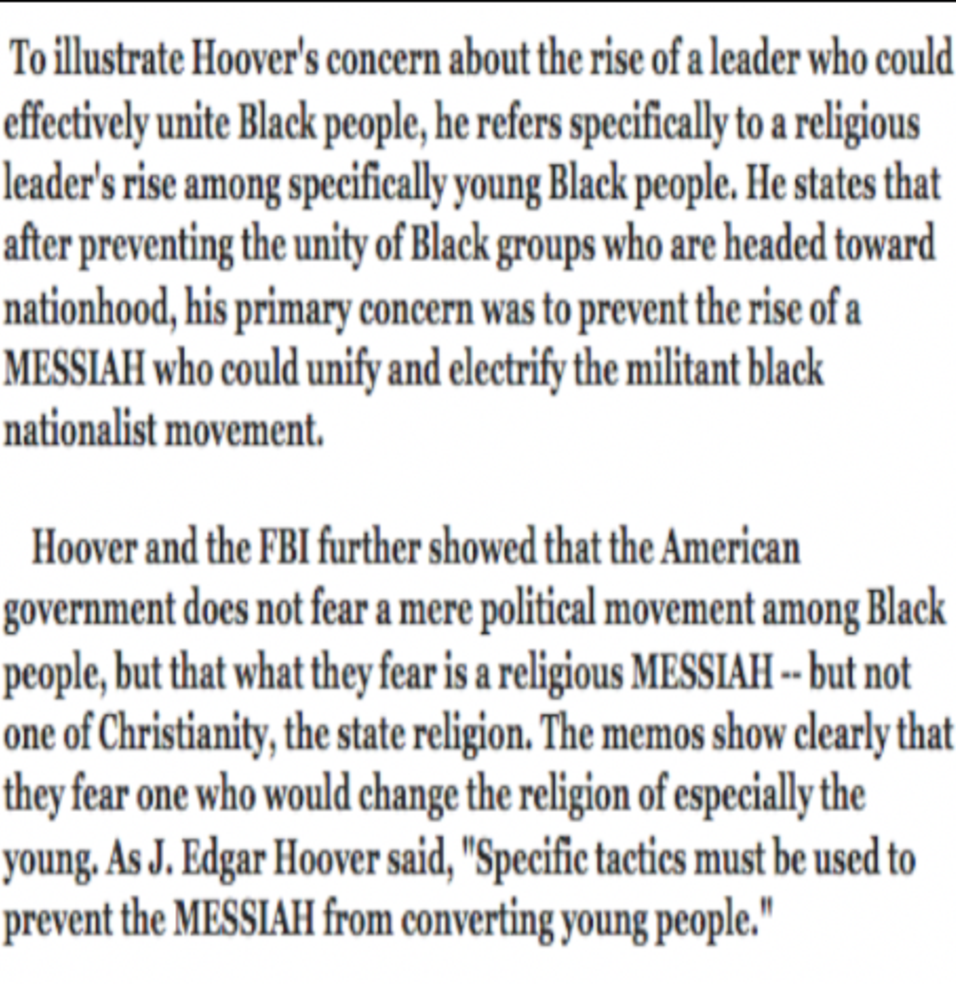 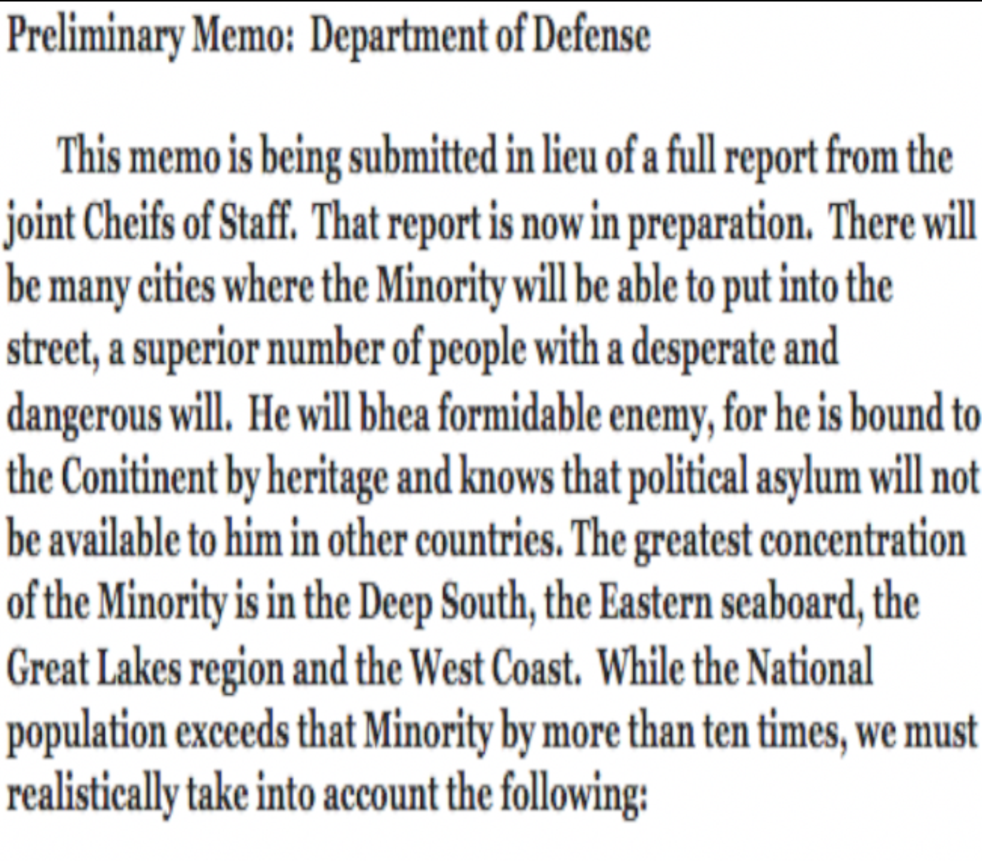 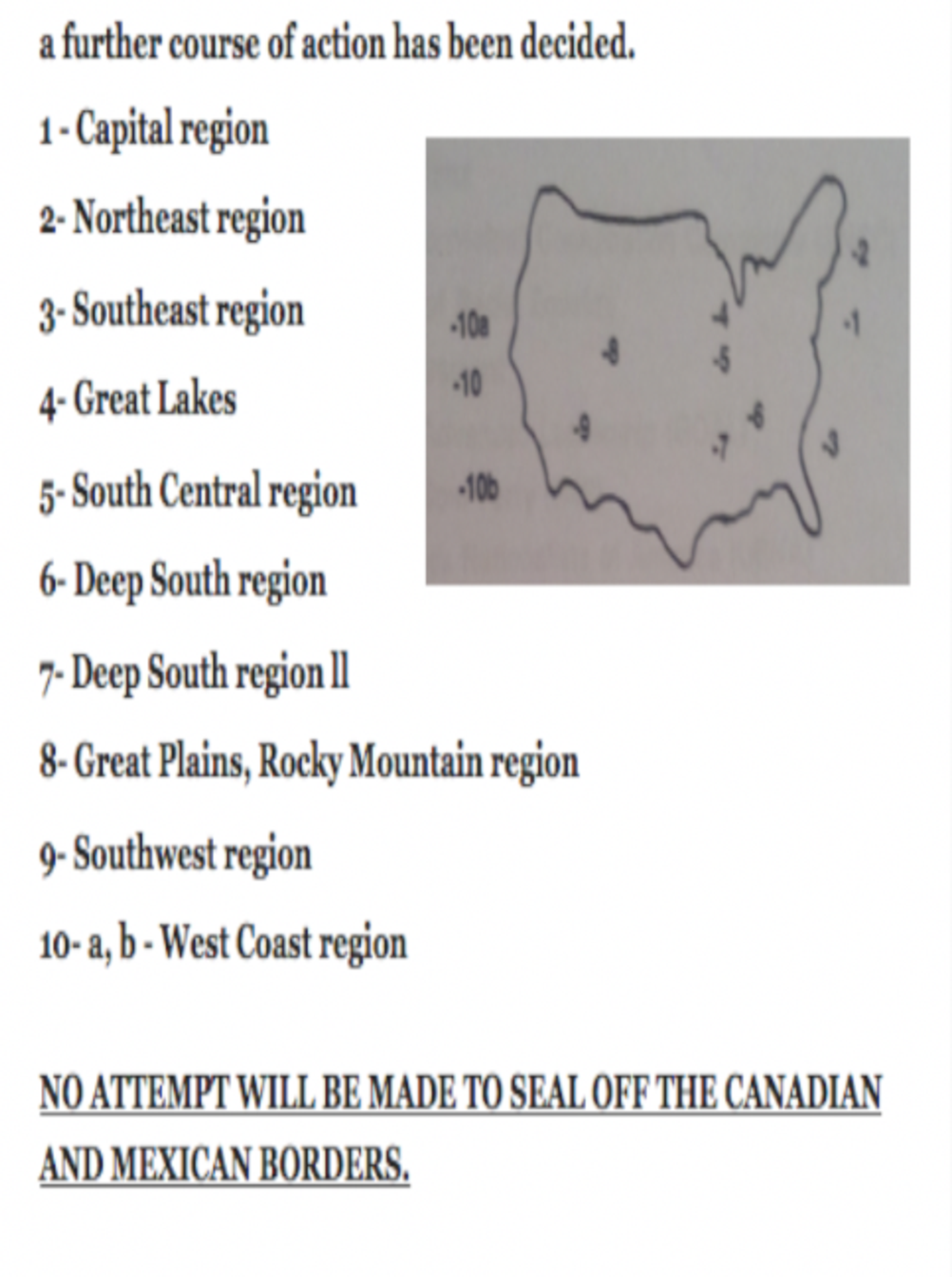 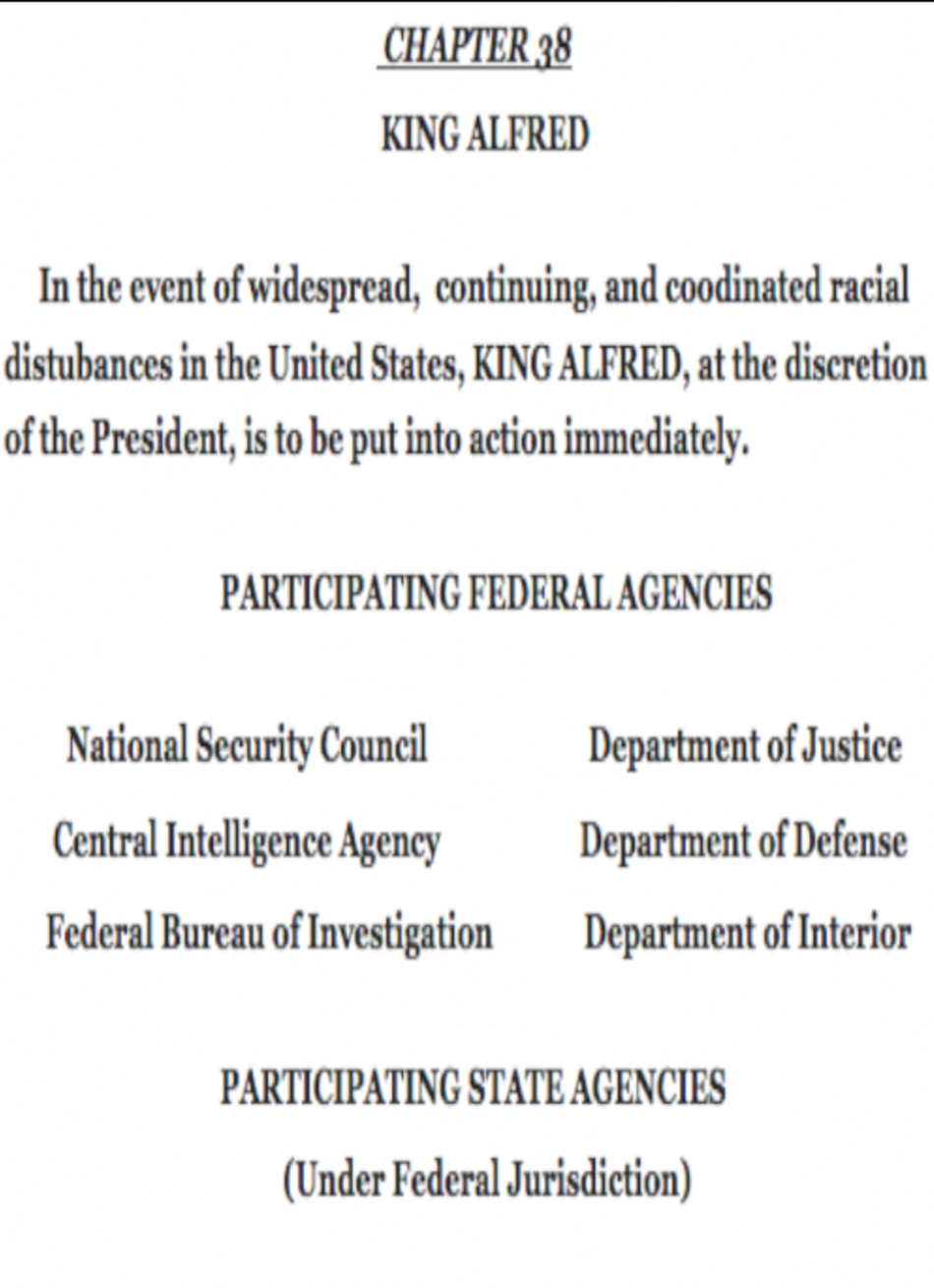 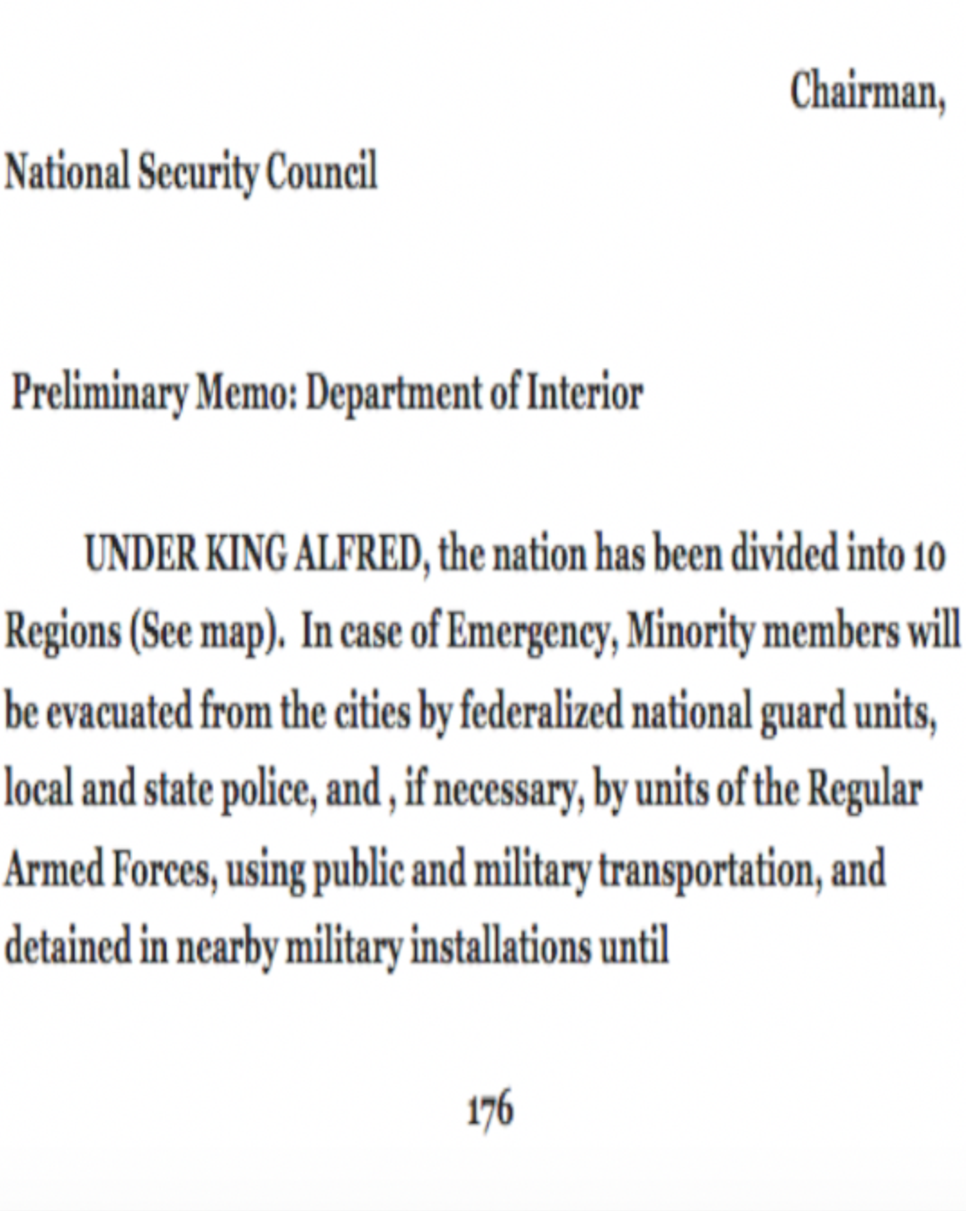 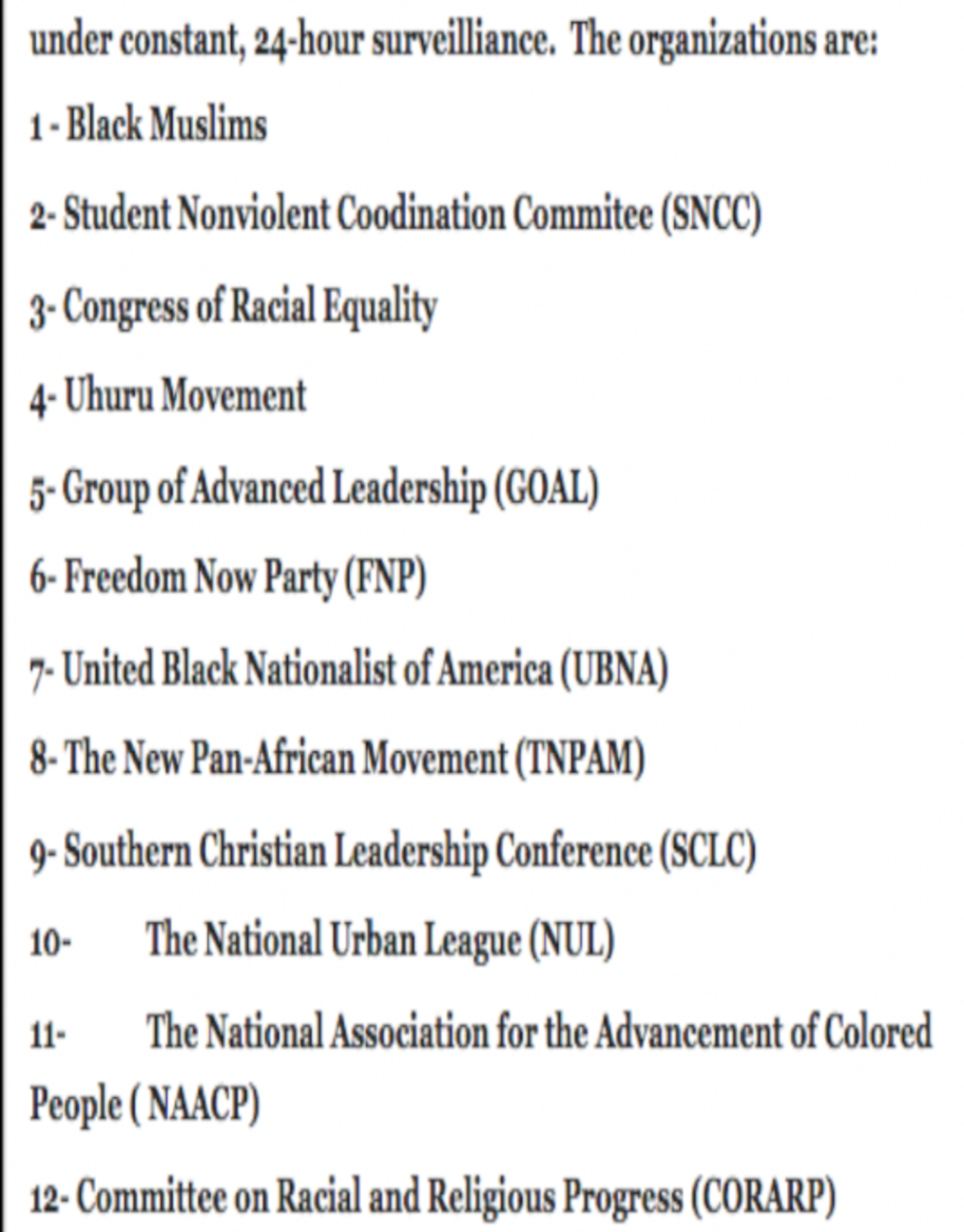 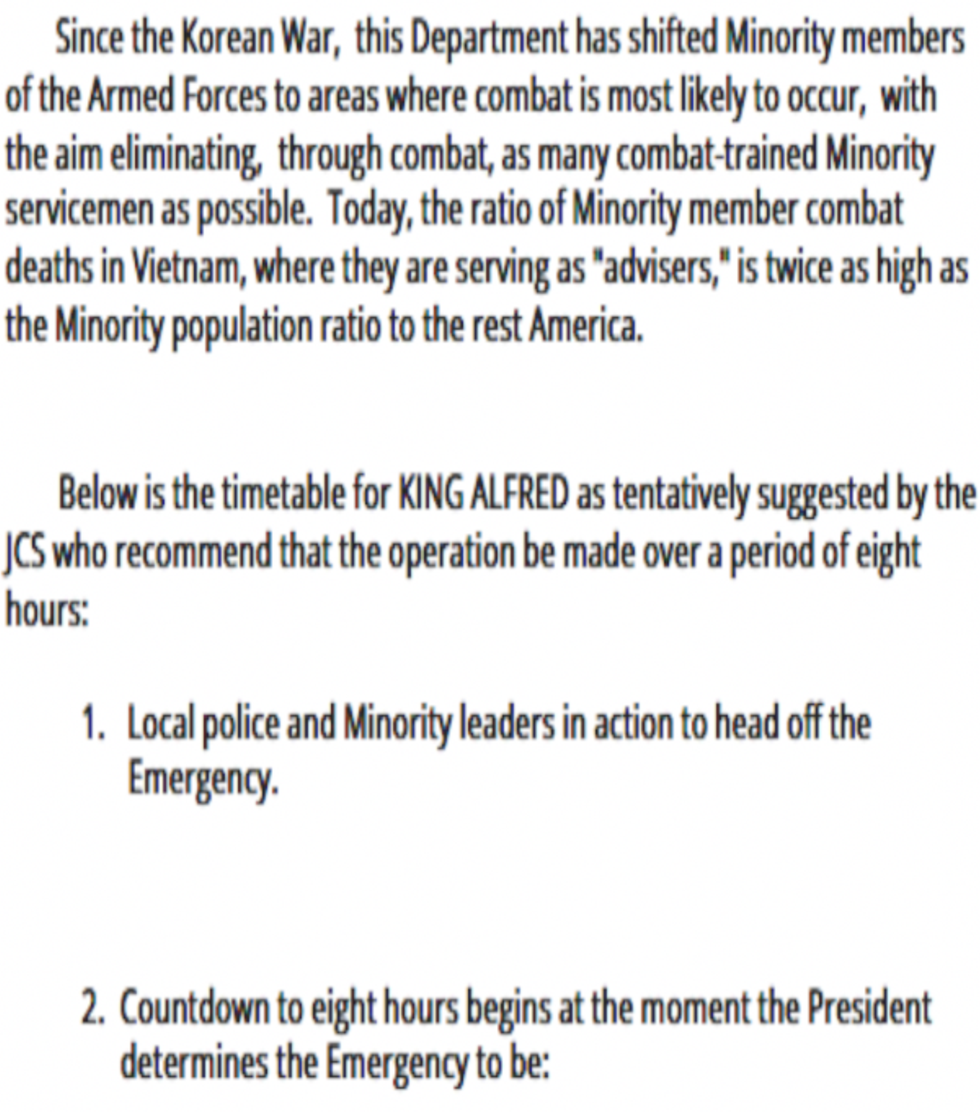 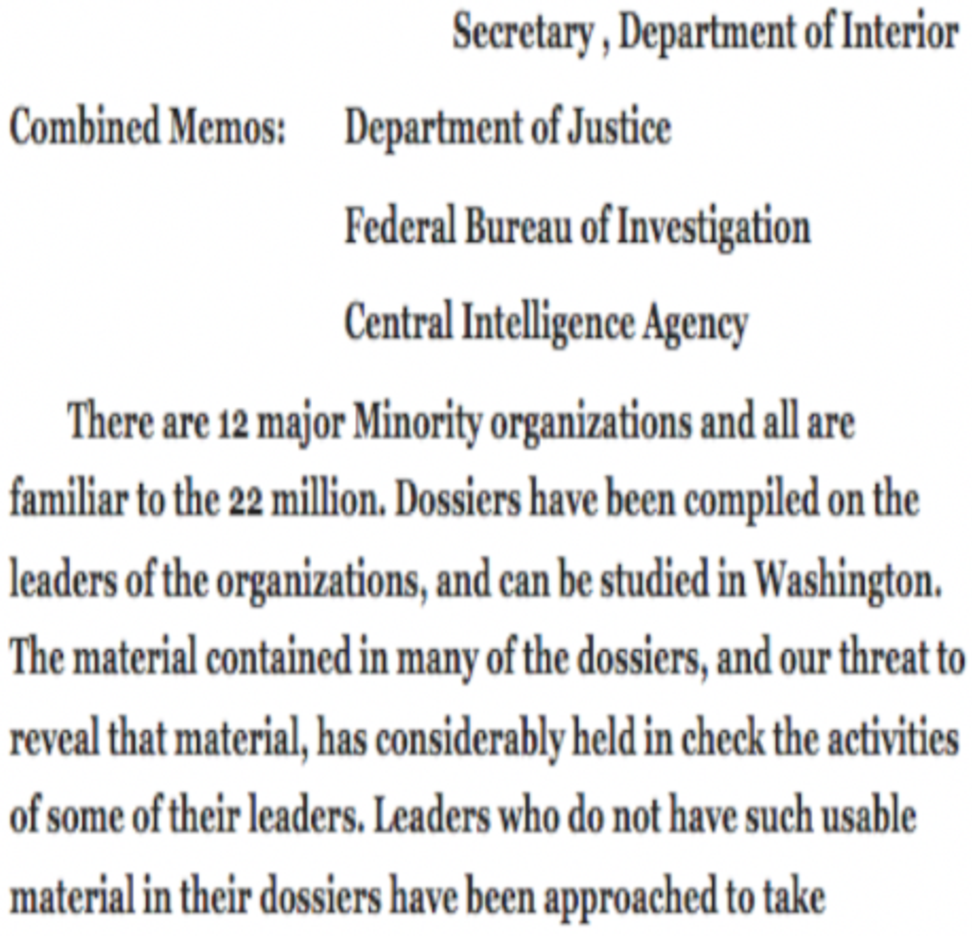 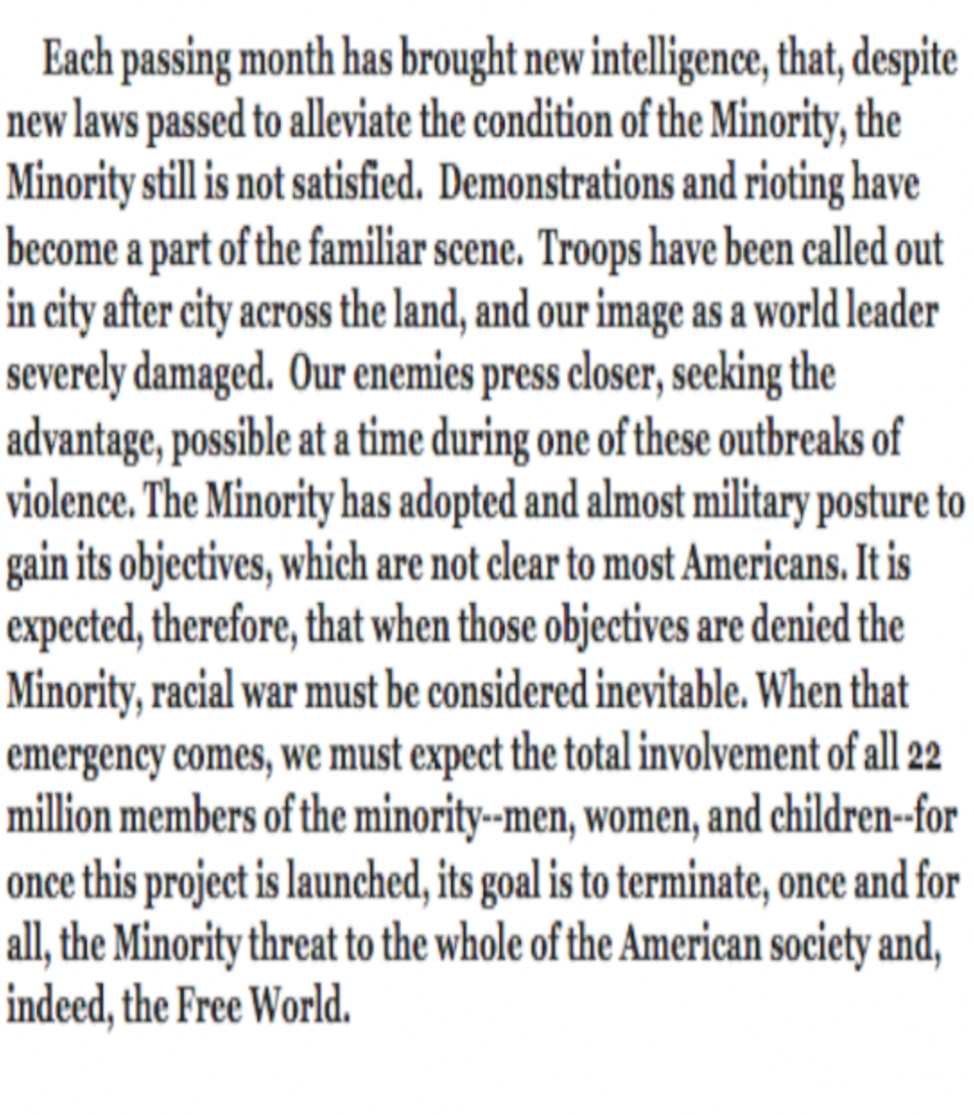 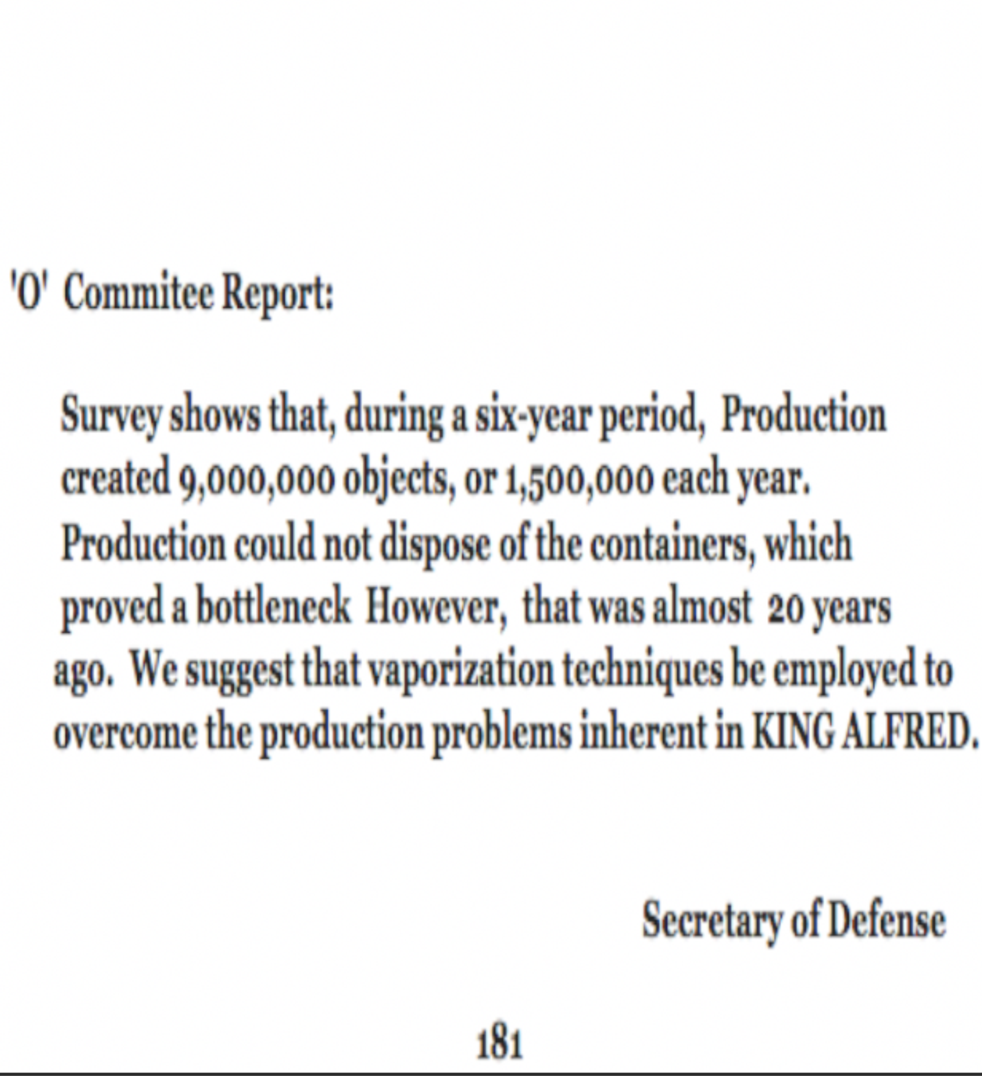 8.    All Minority leaders,  national and local,

10.   All units under regional commands into the Emergency.    0

Survey shows that, during a six-year period,  Production

Production could not dispose of the containers, which

proved a bottleneck  However,  that was almost  20 years

ago.  We suggest that vaporization techniques be employed to 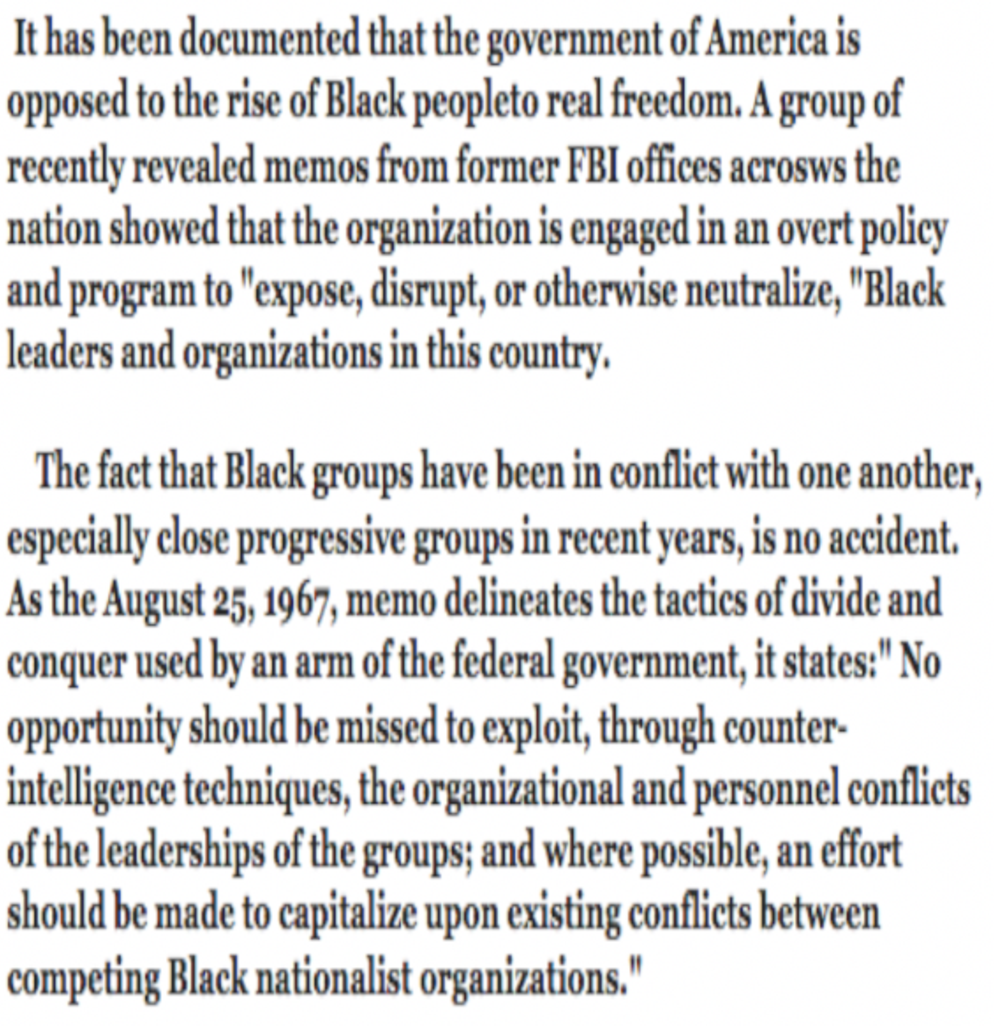 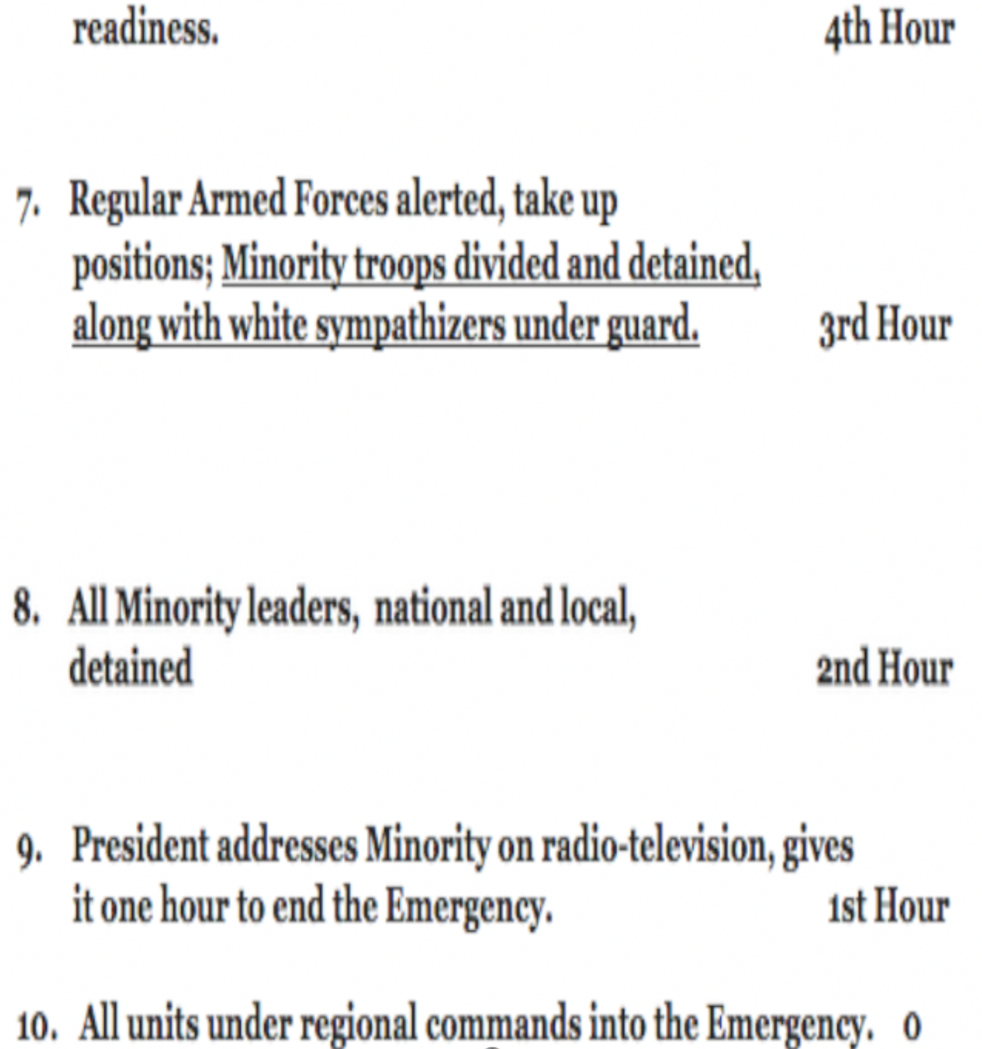 To illustrate Hoover's concern about the rise of a leader who could effectively unite Black people, he refers specifically to a religious leader's rise among specifically young Black people. He states that after preventing the unity of Black groups who are headed toward nationhood, his primary concern was to prevent the rise of a MESSIAH who could unify and electrify the militant black nationalist movement.

Hoover and the FBI further showed that the American government does not fear a mere political movement among Black people, but that what they fear is a religious MESSIAH -- but not one of Christianity, the state religion. The memos show clearly that they fear one who would change the religion of especially the young. As J. Edgar Hoover said, "Specific tactics must be used to prevent the MESSIAH from converting young people."

The San Francisco office of the FBI participated in Hoover's program to the point that they formulated a plan for the "disruptive disinformation" of a Bay Area based national Black organization. The tactics their office proposed to use , and a few people doubt that they did use, was one of placing information among the organization's members. The San Francisco FBI said, "Although this prooposal is a relatively simple technique, is has been applied with exceptional results in another area of intelligence interests where the target was of far greater sophistication."

According to the San Francisco plan, "Xerox copies of true documents, documents subtly incorporating false information, and entirely fabricated documents would be periodically anonymously mailed to the residence of a leader of the organization,"  The FBI's plan was to destroy this organization from within by casting suspicion on its members and leaders by planting information that, according to the memos from the San Francisco office dated May 11, 1970, "These documents would be on the stationery and on the form used by the police department or the FBI in disseminating information to the police.   FBI documents, when used, would contain police routing or data-received notations clearly indicating they had been pilfered from police files."

In October, 1961, a memo was directed to all FBI offices to:  "Be alert to determine evidence of misappropriation of funds or other types of personal misconduct on the part of militant nationalist leaders so any practical or warranted counterintelligence may be instituted."

There are collusive forces among the establishment which are dedicated to destroy any institution which stands as a model for Black Excellence. 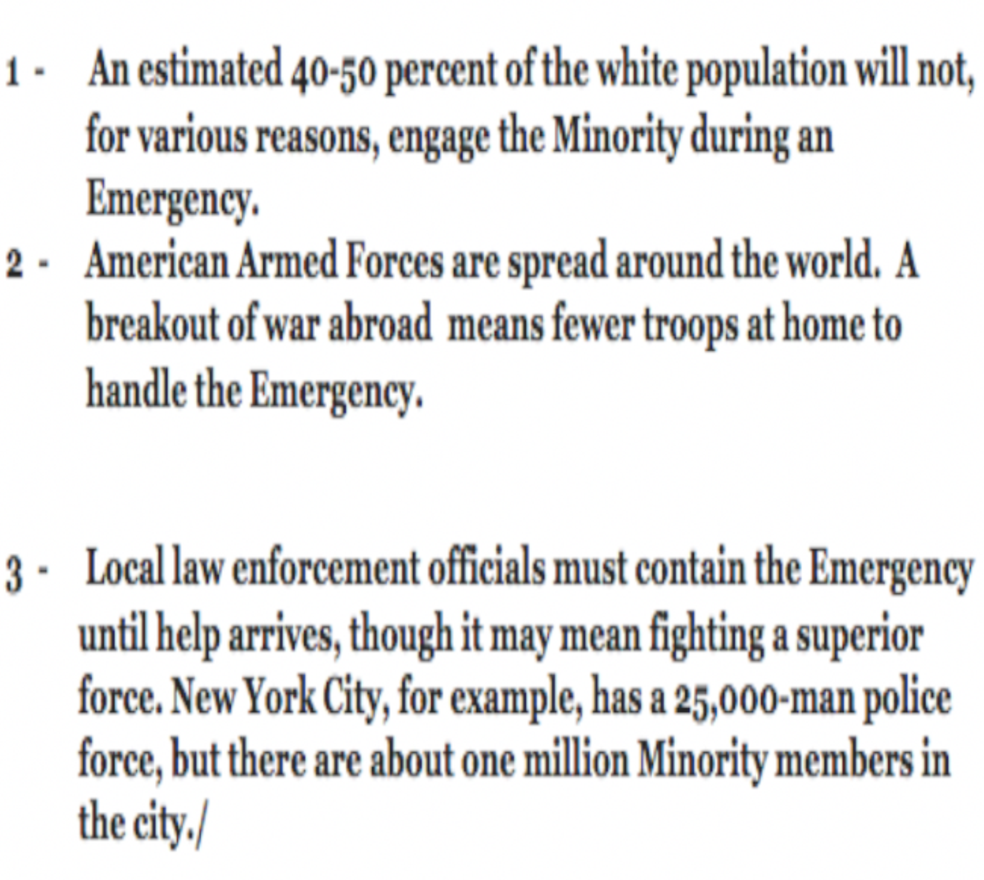 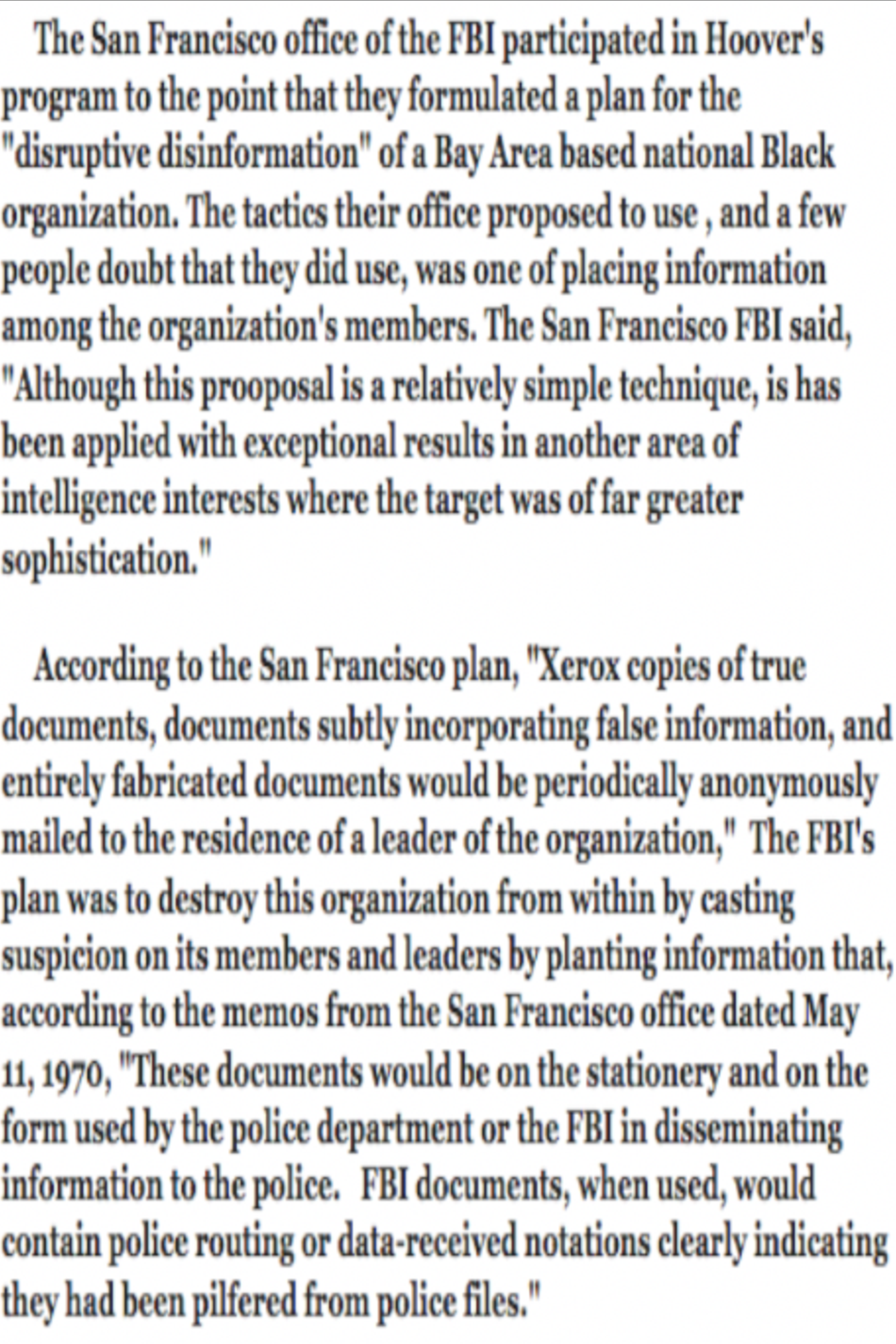 of life, limb, and property, and has cost the taxpayers of this nation billions of dollars.  And the end is not yet in sight.  This same violence has raised the tremendously grave question as to whether the races can ever live in peace with each other.

Each passing month has brought new intelligence, that, despite new laws passed to alleviate the condition of the Minority, the Minority still is not satisfied.  Demonstrations and rioting have become a part of the familiar scene.  Troops have been called out in city after city across the land, and our image as a world leader severely damaged.  Our enemies press closer, seeking the advantage, possible at a time during one of these outbreaks of violence. The Minority has adopted and almost military posture to gain its objectives, which are not clear to most Americans. It is expected, therefore, that when those objectives are denied the Minority, racial war must be considered inevitable. When that emergency comes, we must expect the total involvement of all 22 million members of the minority--men, women, and children--for once this project is launched, its goal is to terminate, once and for all, the Minority threat to the whole of the American society and, indeed, the Free World.

UNDER KING ALFRED, the nation has been divided into 10 Regions (See map).  In case of Emergency, Minority members will be evacuated from the cities by federalized national guard units, local and state police, and , if necessary, by units of the Regular Armed Forces, using public and military transportation, and detained in nearby military installations until